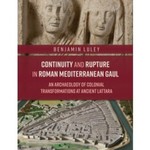 Continuity and Rupture in Roman Mediterranean Gaul: An Archaeology of Colonial Transformations at Ancient Lattara

With the decline in popularity of the term “Romanization” as a way of analyzing the changes in the archaeological record visible throughout the conquered provinces of the Roman Empire, scholars have increasingly turned to the important concept of “identity” to understand the experiences of local peoples living under Roman rule. Studies of identity in the Roman Empire have thus emphasized how local peoples, rather than simply passively copying Roman culture, actively created and recreated complex and multi-faceted identities that incorporated local traditions within the increasingly connected and “globalized” world of the empire. How did the violent nature of Roman rule in the provinces impact local communities and the ways in which individuals interacted with one another? This book provides a detailed study of the ways in which the Celtic-speaking peoples of the ancient settlement of Lattara in Roman Mediterranean Gaul fashioned their lives under two centuries of Roman rule,and in particular the ways in which the creation of these lived experiences was entangled in the larger processes of Roman colonialism.

The important archaeological settlement and port of Lattara (located today in modern Lattes in Mediterranean France), was occupied from ca 500 BCE to 200 CE, and has been the focus of extensive excavations by international teams of archaeologists for over 35 years. The author seeks to understand the ways in which the daily lives of the inhabitants of Lattara were shaped and constrained by the particular historical circumstances of Roman rule, involving the violent conquest of the province between 125-121 BCE, the pacification of numerous revolts in the in the first half of the first century BCE, and the imposition of an oppressive system of taxation, land redistribution, and grain levies.

Through a detailed analysis of the large corpus of archaeological evidence dating from ca. 200 BCE to 200 CE at Lattara, the author argues that the violent establishment of Roman rule in Mediterranean Gaul engendered very different forms of social relationships and interactions that structured the community during the late first century BCE and onward. This involved a new organization of domestic space and living arrangements, new relationships structuring the production and exchange of material goods, different relationships between the community and the wider spiritual world, and new strategies for acquiring political influence and power, based upon the increasing importance of material wealth. All of this occurred by the very end of the first century BCE despite the continued persistence of many aspects of local identity, particularly evident in religious practices. Furthermore, these new social relationships were arguably paramount in the daily practices of reproducing Roman rule at Lattara, and in the larger province of Mediterranean Gaul more generally; practices that were in particular rooted in an ever-increasing socio-economic hierarchy.