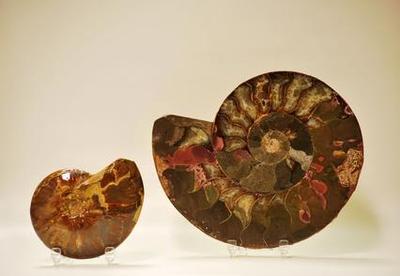 Fossils and their counterparts were objects of speculation during the time of the Renaissance curiosity cabinets. Today similar objects are on display in museums throughout the world. The amount of knowledge available to describe and understand fossils’ origins and creation is what has changed in that time. This knowledge is in part thanks to some of the greatest Renaissance minds. They studied fossils and tackled the question of their origin, even though this often conflicted with contemporary religious views. One of the first steps in the process of identifying fossils was to study the form. Even today the shapes, colors, and sizes of fossils amaze their audience and it is no wonder that they fascinated the natural historians and artists of the Renaissance. In accordance with the fossils’ marvellousness, they were included in great variety in Wunderkammern, Kunstkammern, and curiosity cabinets. Not surprisingly, fossils make an appearance in almost every visual record of a Renaissance cabinet.

One particularly fascinating type of fossil is that of the extinct ammonite; these fossil shells are relatively easy to find but require special care to display and maintain.[1] It was because of their spiral pattern that prior to Robert Hooke’s (1635-1703) work ammonites were “serpent stones” and were in fact cursed snakes. Hooke was one of the first people to acknowledge that these were not snakes, and gave a description of the ammonites that resembles the modern definition of fossils.[2]

In ammonites there are differences in mineralization and opalization (the rainbow sheen) that assure that no two are exactly the same. The shell and its compartments are a mold for the fossilization that occurs inside and when split open, the colors and textures displayed have taken the shape of their compartments in a seemingly artificial manner. The outside of the ammonite, when polished, reveals a beautifully patterned shell, often including an “oak leaf” pattern and opalization. The overall spiral form, a product of the growth pattern, draws the eye through the surface of the shell. It is because of all of these aesthetic qualities that they were, and still are, used to make jewelry. Many of the fossils are works of art in their own right as a culmination of natural activities and the human act of cutting, polishing, and displaying.[3] This technique is reminiscent of the Renaissance gardens with a “third nature”, described “...as a product of nature as artist, acting on art, as well as of man modifying nature”.[4]

The ammonite painting on display is a self-made work exploring the process of natural history illustration.

A note on my personal experience:

From the beginning of my research into fossils in curiosity cabinets, I knew that a self-made artwork would play a role. I believed that a "process piece" would better help me to understand the methods, difficulties, and rewards of natural illustration. First, choosing one fossil out of many to portray proved to be a lengthy process. Once I made my choice, I had to carefully transport the ammonite to my studio space and settle on an arrangement. I knew that I had to work from life, and not from a photograph, to get the real curiosity cabinet illustration experience. Painting took place over several days, starting with the black background and a white base for the ammonites. Gradually I added different colors and patterns and adjusted shape and size as needed. I started out working each compartment as a separate entity, but the smaller the compartments got the more they melded together. This is where my personal style and the style I was emulating were in disagreement; at this point I chose to go with my personal style and leave certain areas as solid chunks of color to contrast the more detailed sections.

I created my own frame and used the "oak leaf" pattern mentioned above as a basis for the raised pattern. This emulates the elaborate framing I observed at the Walters.