2. For decades, many spaceflight enthusiasts have advocated development of a permanently inhabited Lunar outpost as the most logical stepping stone to subsequent destinations such as Mars; a prerequisite for many of these arguments was the need to find and exploit significant amounts of water on the Moon. NASA's 2009 LCROSS mission discovered that there appears to be a significant amount (~5% by mass) of water ice in permanently shaded craters near the Lunar poles. Despite this discovery, there seems to be very little enthusiasm within the Obama Administration for pursuing a Lunar outpost. What has changed in the calculus of human spaceflight and exploration to reduce the attractiveness of developing a permanently inhabited Lunar outpost as a fueling and launch point for future exploration?

Douglas R. Cooke is Associate Administrator for the Office of Exploration Systems Mission Directorate. The Exploration Systems Mission Directorate is responsible for managing the development of flight hardware systems for future human exploration beyond low Earth orbit, including the moon, near Earth asteroids, Mars and its moons and other destinations. Mr. Cooke has over 37 years of unique experience with many projects, including the Approach and Landing Tests in 1977, Analysis Office when the Space Station Program Office was first organized in 1984, Space Shuttle Program Office after the Space Shuttle Challenger accident, and the Space Station Program Office as Vehicle Manager during the redesign of Space Station Freedom. Tom Cremins served as NASA's Deputy Assistant to the Director for Human Space Flight Programs, Russia. He joined NASA in 1993 as a Russian affairs program analyst in the Office of Space Flight at NASA Headquarters. In May of 1994, he transferred to the Johnson Space Center in Houston, where he has held progressively responsible positions supporting Russian space flight programs. He is now the Director Legislative Liaison for the Office of Legislative and Intergovernmental Affairs.

Rebecca Keiser was named NASA's associate deputy administrator for strategy and policy in June 2012. Previously, she has served in NASA's Office of International and Interagency Relations as the lead for France, Spain, and Portugal, and the human spaceflight lead for Asia. She also was the assistant to the director for International Relations in the Office of Science and Technology Policy, where she made policy recommendations and represented the agency at U.S. and international meetings.

William C. Hill is the Assistant Associate Administrator for Space Shuttle Program at NASA Headquarters in Washington DC, manages the Space Shuttle Program, working closely with the NASA teams at the NASA Centers. He led critical activities to prepare and deliver the Space Shuttle to safe flight following the loss of the Columbia crew and vehicle. He is currently focused on how to transition Shuttle into retirement, and help initiate the effort to return to the Moon and Mars. 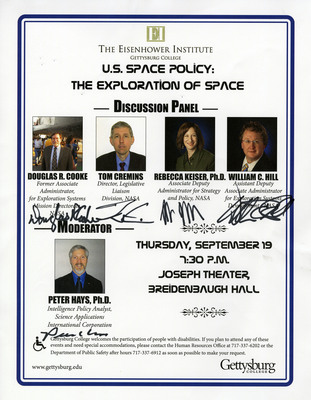