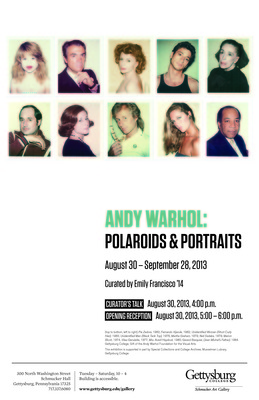 Famous pop artist Andy Warhol took tens of thousands of Polaroid photographs throughout his career. Using snapshots as preliminary sketches, he was frequently commissioned by wealthy socialites who wanted their faces captured by him. Both famous and lesser-known personalities flocked to Warhol’s studio “The Factory,” hoping to share in his spotlight; through selling these commissioned portraits, Warhol allowed his subjects to purchase their “15 minutes of fame.”

In 2007 the Andy Warhol Foundation for the Visual Arts announced its 20th anniversary Photographic Legacy Program, which aimed to provide greater access to Warhol’s work and process across the country in a wide range of communities. It gifted a total of 28,543 original Warhol photographs (valued in excess of $28 million) to college and university museums across the United States, enriching the holdings of institutions that would not otherwise have the means of acquiring Warhol’s works. Through this outreach, Gettysburg College was one of 183 institutions to receive a donation of original Polaroid photographs and gelatin silver prints. Andy Warhol: Polaroids & Portraits, curated by Emily Francisco ’14, will display a selection of these works to the Gettysburg College community for the first time.

Well-known subjects featured in this exhibition include actress Pia Zedora, Canadian hockey player Wayne Gretsky, and modern dancer-choreographer Martha Graham. As a body of work, these Polaroids represent an integration of Warhol’s two fascinations: first, the nature of the famous, and second, the power of instantaneity within the mechanical camera. Jenny Moore, curator of the Photographic Legacy Program, notes: “A wealth of information about Warhol’s process and his interactions with his sitters is revealed in these images… Through his rigorous – though almost unconscious – consistency in shooting, the true idiosyncrasies of his subjects were revealed… By presenting both [Polaroids and black and white photographs] side by side, the Photographic Legacy Program allows viewers to move back and forth between moments of Warhol’s ‘art,’ ‘work,’ and ‘life’ – inseparable parts of a fascinating whole.”