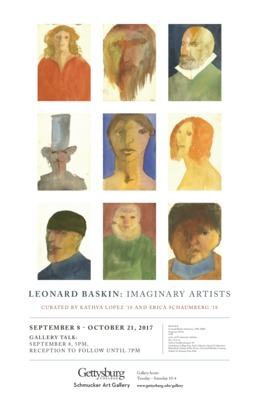 Leonard Baskin (1922-2000) was an American sculptor, illustrator, and printmaker. He is perhaps best known as a figurative sculptor and a creator of monumental woodcuts. The Gehenna Press, Baskin’s private press, operated for over 50 years (1942-2000) and produced more than 100 volumes of fine art books. His most prominent public commissions include sculpture for the Franklin Delano Roosevelt Memorial and the Woodrow Wilson Memorial, both in Washington D.C., and the Holocaust Memorial in Ann Arbor, MI. Baskin received numerous honors, among them a Guggenheim Fellowship, the Gold Medal of the National Academy of Arts and Letters, and the Jewish Cultural Achievement Award. He had many retrospective exhibitions, including those at the Smithsonian, the Albertina, and the Library of Congress. His work is in major private and public institutions, including the Metropolitan Museum of Art, the Museum of Modern Art, the Art Institute of Chicago, the British Museum, and the Vatican Museums.

Imaginary Artists, a collection of 25 watercolor sketches, was completed in 1976 as a gift for Baskin’s friend, the distinguished Philadelphia lawyer Edwin Rome, and his wife, Rita. In this series Baskin skillfully acknowledges the Western art historical canon through irreverent references to traditional compositions and famous artists. His group of imaginary—or one can imagine uncredited—artists were often figured as the assistants, students, or rivals to the most noted painters of the centuries and include “Smedley Webb, little-known student of T. Eakins” and “Antonin du Colines, assistant to Poussin.” Through these representations, Baskin mirrors his earlier 1963 series Portraits of Artists, but takes up the subject, history, and medium of painting with humor and a serious commitment to figuration.