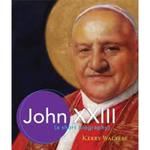 His adult life was unremarkable; in his role as Papal Nuncio to France, he was considered an “affable amateur.” When he was elected pope in 1958, it was thought he would be a placeholder, someone who was easily controllable until the Curia could decide on a worthy successor. Instead, Giuseppe Roncalli, Pope John XXIII, distinguished himself by establishing a spirit of aggiornamento— “opening wide the windows of the Church”&mdashhand convened the Second Vatican Council in 1962.

Walters brings you into the life and times of Pope John XXIII, from his simple upbringing as one of fourteen children growing up on a farm in Italy, to his seminary education and formative role models, through his ministry in the Church, leading up to his election as pope in 1958. Walters then focuses on the key ways Roncalli sought to reform the Church, and shepherd it into the twenty-first century.

Walters shows that what was perceived by the hierarchy as mediocrity was indeed a deep humility that enabled the pope to truly be a model of Christian discipleship. Il Buono Papa, the Good Pope, will inspire you with his love for God, for all people, and for the Church itself. This is a book to be enjoyed and treasured as we witness the recognition given John XXIII as a saint for our times. [From the publisher]

Original version is available from the publisher at: http://catalog.franciscanmedia.org/Product.aspx?ProductCode=B36751