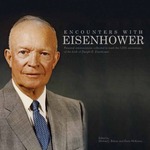 Encounters with Eisenhower: Personal Reminiscences Collected to Mark the 125th Anniversary of the Birth of Dwight D. Eisenhower

The general who orchestrated the greatest amphibian invasion in history, and led Allied forces in the great crusade to crush Adolf Hitler’s armies, subsequently became a popular two-term president of the United States. In the annals of American success stories, it’s hard to beat the life that Dwight D. Eisenhower made.

Yet this heroic figure was also a “natural man,” as one of the contributors to this volume of personal reminiscences suggests. Lady Dill was referring to Eisenhower’s humanity and lack of pretense. Unlike other leading figures of his day—including a certain five-star general who orchestrated the American island-hopping campaign in the Pacific Theatre during World War II—Eisenhower was relatable to the average man or woman, whatever his or her status, standing, or role. [excerpt]

This is the publisher's version of the work. This publication appears in Gettysburg College's institutional repository by permission of the copyright owner for personal use, not for redistribution.