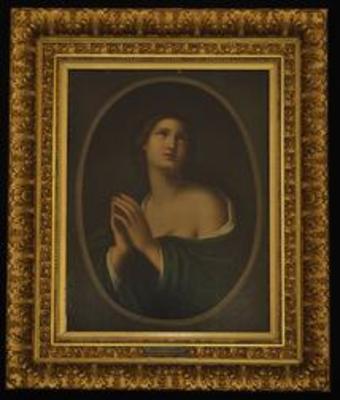 Faith by Italian Artist: The Imagery of Religion During the Renaissance

Very little is known about this refined Italian portrait, which was donated to Gettysburg College in 1931. A pious woman, with her hands delicately folded in prayer, gazes heavenward as her eyes roll up towards the high right of the painting. A small inscription serves as the image’s only identification:

“Faith by Italian Artist / Given by Dr. & Mrs. Jeremiah Zimmerman.”

Paintings were objects of great value to the Renaissance collector, especially in Italy. In their Tribuna in Florence, the Medici featured prominent works of art by masters such as Raphael, Michelangelo, Titian, and Dürer.[1] Paintings expressed wealth, intellect, and power, but they also could express religious convictions.

The Protestants versus the Catholics

The Roman Catholic Church had long believed in the use of images as powerful teaching tools, but the Counter-Reformation and the Council of Trent from 1545 to 1648 made this practice even more important. Beyond that, the Protestant Reformation and in turn the Catholic Counter-Reformation had a huge impact on all artwork throughout Europe. There grew a sharp divide between Northern artists, who portrayed an "individual and direct relationship with God" with intimate scenes and intricate details, and Catholic artists, who highlighted the power of intermediaries like the Saints between Christians and God. Catholic paintings, with their narratives of biblical scenes, saints’ lives, and allegories also reflected the urgency of a new religious mission: to encourage believers to remain in the Church.[2] In their kunstkammern, collectors of both scholarly and royal status could show their support for the Church and its cause.

The Depiction of "Faith"

In the Italian Renaissance and Baroque periods, Faith, one of the Three Theological Virtues (the other two being Hope and Charity), was personified in art as a beautiful, pious woman, much like the oil painting in The Gettysburg Cabinet. From 1400 to 1650 there were a number of consistent attributes associated with the representation of Faith, which were most distinctive in Italian painting. She frequently holds a chalice and cross, symbols of Christ’s sacrifice, which can be seen in the Faith panel of The Three Theological Virtues series by an unknown Umbrian artist (above right, dated 1500). Often she is gazing upward, sometimes with a halo, as portrayed above center in Titan’s Faith Adored by Doge Antonio Grimani.

Gettysburg College’s portrait, however, is more comparable to Francesco Furini’s Faith (right, dated 1633). Furini’s painting focuses on Faith’s facial and upper body. She is wrapped in a white mantle that exposes her left shoulder and part of her breast, which illustrates Furini’s classical influence.[3] The left shoulder of Gettysburg’s Faith (far right) is also bare, albeit more modestly, and is wrapped in a green mantle with a white underside. Both paintings have dark, flat backgrounds, reminiscent of those used by Caravaggio and his workshop, and both figures are also portrayed with delicate, almost glowing skin. Furini’s Faith, however, is set in profile and is gazing to the left of the painting; she also holds a gilded chalice. Gettysburg’s Faith is fully facing the viewer, and is gazing upward over her left shoulder, presumably towards heaven. Caravaggio’s works may have also inspired this direct and straightforward position. She holds neither a chalice nor a cross, but instead conveys her piety through her heavenward expression and arrangement of her hands in prayer. The brushwork is also different, and reflects a technique similar to that of Caravaggio or Raphael.

This work is not dated, with the exception of its tentative donation date of 1931.[4] Donor Jeremiah Zimmerman, who graduated from Gettysburg College in 1873, is well known for giving over 75,000 books, pamphlets, maps, and artworks from his own collection to Schmucker Memorial Library, which opened in 1930. In The Gettysburg Cabinet, "Faith by Italian Artist" alludes to the presence Christianity would have had in curiosity cabinets. Here, Faith presides over nature and artifice, praising all of God’s creation.

For more information on the resources that contributed to this project, visit:

Department of Art and Art History

[1] Joy Kenseth. “A World of Wonders in One Closet Shut.” The Age of the Marvelous (Hanover, New Hampshire: Hood Museum of Art, Dartmouth College, 1991), 82.