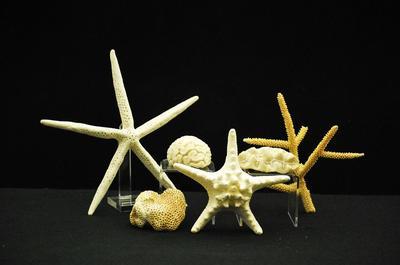 The Quest for Undersea Understanding: Corals and Sea Stars in Renaissance Collections

During the Renaissance, the quest for universal knowledge drove scholars, royals, and others to collect any and all curiosities that they could. Intrigue surrounding creatures of the sea was vast and likely linked to a relative inability to explore the ocean. While shallow waters were accessible, the depths of the sea were unreachable. Importantly, there was a longstanding tradition of the oceanic environment mirroring the heavens, because the terrestrial earth was considered to exist between the two at the center of the universe. For this reason, there was great fascination with creatures of the sea. Additionally, religious beliefs may have contributed to a collector’s desire for these oceanic specimens; it is suggested that curiosities from the sea were associated with the great flood, making these spiritually significant. The collector’s ability to obtain and display items from the sea was seen as analogous to God’s power to “overturn nature’s lawful order and turn land into sea.”[1]

Many felt that sea stars in particular exemplified the belief that “whatever is excellent in the Heavens there is a certain resemblance in the Sea, which is as it were the other’s looking glass.”[2] These curiosities were also illustrated in at least one of Ulisse Aldrovandi’s encyclopedic books; the images shown on the right were made using woodcuts and showed both the dorsal and ventral views of a variety of brittle star. [3] Additionally, sea stars bore extensive religious symbolism related to the Virgin Mary, ‘Star of the Sea,’[4] and this religious connection would have encouraged collection of sea stars during the Renaissance. These echinoderms were often collected in their dried form or preserved in jars by various methods.

Coral was another frequent component of Renaissance collections, and this may have been because collectors and naturalists were fascinated by its condition in addition to its origin. Coral presented a dilemma to the naturalists of the Renaissance, because it was viewed as being “between life and death” and seemed to combine the animal, mineral, and vegetable into one.[5] Some collectors at the time believed that coral could be a missing link in nature, [6] existing both as a plant and a living animal, but in truth being neither.[7] In many texts, coral was classified as a plant rather than the animal it truly is; collected coral specimens are the accumulation of calcium carbonate skeletons of many animals living and growing together. Coral was believed to have various powers, both medical and magical. One example, listed in Gerald’s Herbal stated that some “hang it about the necks of such as have the falling sicknesse, and it is given in drinke for the same purpose.”[8] Other medicinal purposes, as well as use as protection from diabolical monsters are cited.[9] These beliefs, coupled with curiosity surrounding coral’s existence, contributed to its display in cabinets both in its natural form and with various levels of adornment, such as elevated on stands or carved into religious figurines, for example in Ferdinand II's cabinet at Schloss Ambras. [10] Often, these variations of coral were presented together, juxtaposing art and nature of the same basic component, coral. An example of these groupings is shown in at left, in which coral is used to represent rocks, trees, Christ, the Thieves, and the crosses used for their crucifixion. These were grouped together in a sort of grotto in Ferdinand II’s collection. [10]

The Gettysburg Cabinet in the Schmucker Art Gallery showcases one dried white finger starfish (Linckia laevigata) and one dried chocolate chip starfish (Protoreaster nodosus), as well as two preserved sea stars (Asterias spp.) shown in the photo at the right. All of these samples were collected in Nicaragua by Dr. István Urcuyo of the Gettysburg College Biology Department. The coral specimens in The Gettysburg Cabinet include grooved brain coral (Diploria labyrinthiformis) and staghorn coral (Acropora cervicornis) of unknown origin belonging to the Gettysburg College Biology Department, as well as boulder (Montastrea annularis) and common rose coral (Manicina areolata) collected in Nicaragua by Dr. Urcuyo.