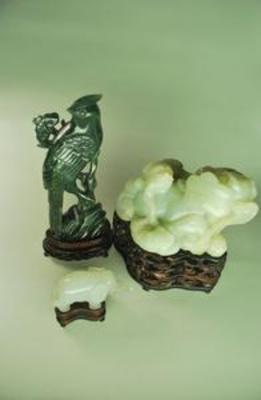 The quest for knowledge during the Renaissance caused the European powers to stretch their control all over the world. This meant spreading their control to worlds that were previously unknown such as the Americas, Africa and Asia. In these newly found worlds, explorers collected anything that they could ranging from living specimens to ethnographic artifacts.[1]

Artifacts from Asia were highly esteemed in Renaissance Europe, and porcelain, silk, paintings, ivory and mother-of-pearl were often traded; jade, however, was not. Jade did not become popular in Europe until the 19th century, so having a jade carving in a Kunstkammer like this exhibit would have been an extraordinary rarity. Jade has been used as a carving material by many cultures for millennia, but it has always held a special place in China.[2]

Jade refers to two different metamoprhic hard rocks: Jadeite and Nephrite Nephrite is composed of calcium, iron and magnesium, while jadeite is composed of sodium and aluminum. These two rocks come in a variety of colors including red, blue, yellow, white, and black, but the most common color that these rocks come in is green. The greens that are used come in a variety of shades from dark (such as the phesant statue) to lighter shades (such as those of the lion and the elephant).

Jade has had a special place in Chinese Religion for over 7000 years. It has been the preferred medium of sculpture in any religious artifact in Buddhism, Taoism and Confucianism. Jade was not traded by the Chinese due to its religious significance. In Chinese thought, jade carries positive characteristics that represent the best in man – loyalty, faithfulness, exquisiteness, mysteriousness, benevolence, intelligence, righteousness, propriety and musicality – and even paradise itself.[3]

The three statues used in this exhibit were donated to the Gettysburg College Special Collections at Musselman Library by former professor of Education Dr. Frank H. Kramer. Dr. Kramer was an avid collector of Asian art who used his collection to teach courses on the Appreciation of Asian Art.[4] The lion came from the Shun-Chih period, which lasted from 1643-1661. Both the pheasant and the elephant statuettes come from the Chi’en Lung Period, the dynasty in China that lasted from 1735-1796. The Ch’ien Lung Period was the most productive period for jade carvings; there was not a period before this or after this where the carvings were so plentiful, so detailed and so beautiful.[5]

The animals represented in these three statuettes -- the pheasant, the elephant, and the lion -- were important to Chinese religion and thought. The pheasant or Hua Chung, for example, was often used as a symbol for the empress. There are many different species of the pheasant in China. One species in particular, Argusianus argus, was also thought to have been the phoenix of ancient lore, which meant that the pheasant had supernatural powers. The phoenix presided over the southern quadrant of the heavens and it represented the sun, peace, and beauty. The pheasant in the Gettysburg Cabinet stands beautifully perched on a tree branch looking behind it.

The elephant also had many symbolic meanings throughout Chinese history. It was used in ancient China as a war machine, yet it also represented positive characteristics such as strength, sagacity, prudence, power and energy. To Buddhists, the elephant stood for much more. The elephant is one of the Seven Treasures of Buddhism, and has been depicted in Chinese art offering flowers to the Buddha. Buddhists belived that a white elephant would announce the birth of the Buddha. According to Buddhist thought, the Buddha had been reincarnated six times as an elephant. The elephant in our Cabinet at Gettysburg College is very small. It is in a pose as if it were walking forwsard and trumpeting with its trunk pointing up and forward.

The final animal represented in the exhibit is the lion, a common and important symbolism in Buddhism for many years, representing the law and protection. [6] It is not uncommon to see a lion statue outside of buildings that are sacred to Buddhism such as temples and tombs.[7] Like the elephant, the lion is so important to Buddhism that Buddhists feel that the Buddha was reincarnated ten times as a lion[8].

The lion statue in the Gettysburg Kunstkammer is mounted on a beautiful wooden stand that depicts flowers and vines. The statue depicts the beautiful flowing mane of the lion while he is looking upwards. There are also two cubs playing with the adult lion in playful positions.

Although these incredible statues may not have been common in Renaissance Cabinets, they represent the fascination that Renaissance Europe would have had with the alluring curiosities of the East. They probably would not have understood the important connotations these animals and even the medium carried, but they would have been greatly appreciated for their beauty and exoticism.