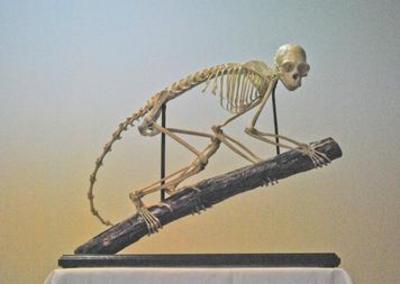 Cebus Capucinus, or Capuchin monkey, is a primate species native to Central America.[1] Capuchins usually have cream colored fur around their faces, with dark brown fur covering the rest of their bodies. Weighing between three and nine pounds, the Capuchin monkey is a small animal surviving on an omnivorous diet of fruits, plants, and insects.[2] Characteristic of New World monkeys, the Capuchin has a long, slender tail used to wrap around tree branches. With an unusually large brain, they are considered the smartest species of New World monkeys.[3]

The Capuchin skeleton featured in this exhibition, courtesy of the Gettysburg College Biology Department, is posed gingerly on a branch. Its elongated finger bones resemble those of humans, allowing a firm grip while climbing. The monkey is positioned in mid-stride, its slender tail curving delicately around the branch.

The name “Capuchin” was devised by New World explorers who first discovered the monkey in the 15th century. Noting a patch of dark brown fur on top of the monkeys’ head that resembled a hood, they named the species after the Friars Minor Capuchin, an order of Franciscan friars who wore dark, hooded robes.[4]

In the Middle Ages, monkeys and apes developed significant symbolic associations in art and literature, often representing evil and the devil. Because of their anthropomorphic characteristics, monkeys were said to be the imitator of man. This linked them to the Antichrist, the imitator of God, and ultimate symbol of evil.[5] In the Renaissance, monkeys commonly symbolized foolery and irrationality.[6] Sixteenth century Flemish painter Pieter Brueghel was fond of allegory, and often included monkeys in his paintings. In a 1562 painting, Brueghal painted two monkeys chained and imprisoned, warning viewers against the ill-effects of a sinful, foolish lifestyle.

Renaissance aristocracy also began to adopt monkeys as pets, often treating them as servants. Ulisse Aldrovandi, a sixteenth century natural historian, wrote of a monkey in the West Indies who performed duties for his master. According to Aldrovandi, the monkey would be sent to retrieve wine from a local shop, carrying “a flask in one hand and money in the other.”[7] Flemish artist Anthony Van Dyck also recorded the presence of monkeys as court pets. In his portrait of Henrietta Maria and Sir Jeffrey Hudson, court dwarf, a playful monkey scampers across the shoulders of Sir Jeffrey.

Today, Capuchin monkeys still appear in art and literature. In popular twenty-first century films, Capuchins have served as loyal sidekicks. In Disney’s Pirates of the Caribbean series, Captain Barbosa’s pet monkey “Jack” is a tiny Capuchin. Likewise, in Indiana Jones and the Raiders of the Lost Ark, a Capuchin monkey saves the hero’s life by eating a pile of bad dates meant for Jones. Capuchins are also the famed monkey sidekick to organ grinders.[8]

With a long history rooted in symbolism, Capuchin monkeys are a prized New World species known for their intelligence and human-like characteristics. In the Renaissance, particularly, the monkey was an important implement in moralistic art and literature, but it also represented a new era of discovery and progressive thinking.