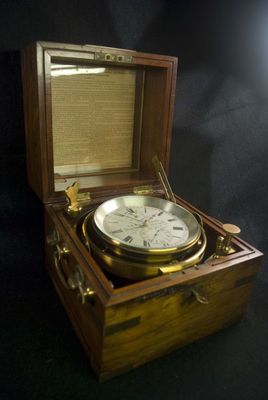 With the invention of his chronometer in the mid-18th century, an Englishman by the name of John Harrison solved the centuries-old problem of how to calculate time and longitude accurately and efficiently while at sea. Since one degree equals four minutes, sailors determined their positions by calculating the time difference between their ship and a point on land whose time and longitude they knew.[1] The marine chronometer enabled sailors and explorers to calculate their longitude with an unprecedented degree of accuracy, thereby spurring on a new era of maritime exploration.

Until John Harrison’s breakthrough, seafarers relied on measurements of the heavens or on pendulum clocks to tell time while at sea. One way to tell time in the former method, mariners consulted an instrument called the clock of heaven, which reflected the position of the sun, moon, and stars. Mariners then coordinated these positions with tables of logarithms.[2] This procedure often exceeded four hours and was nearly impossible on cloudy or overcast days. The latter method, which was the use of pendulum clocks, was far less tedious but no more accurate than using measurements of the heavens; the rolling motions of ships altered the pendulum’s swing, and constant fluctuations in temperature caused the timepiece’s metal parts to expand or contract, both of which rendered its display inaccurate.

Well before Harrison’s invention, Renaissance collectors such as the Medici Family and the Holy Roman Emperor Rudolf II (1552–1612) treated and maritime instruments as objects of curiosity and wonder. The Medici were partial to sextants and astroblabes, of which their private collections contained many.[3] A zealous collector of clocks, Rudolf II elevated their status in the context of collections by patronizing clockmakers such as Jost Bürgi (Swiss 1552-1632).[4] Relationships such as this led to the invention of a clock that measured seconds, a technological advancement that proved invaluable to the precise timing necessitated by the marine chronometer.[5]

The chronometer that is part of the Gettysburg Cabinet is a product of the mid-to-late nineteenth century. Marked with the serial number 1568, the instrument-making company T.S. & J.D. Negus produced this object in New York City.[6] The most striking similarity between this chronometer and Harrison’s original version is the use of brass, whose light weight and malleability were ideal for instrument-making.[7] Unlike the original design, T.S. & J.D. Negus’s version of the marine chronometer is encased in a rosewood box. Harrison’s original design featured only its basic mechanisms and a metal front piece, a utilitarian approach that might have served to reduce the object’s already overbearing weight of 72 pounds. Eventually, advances in technology, particularly the advent of electricity, enabled the creation of more compact mechanisms and increased design options.

The advent of electricity can be seen in the Gettysburg chronometer, whose mechanisms are battery-powered. Because of this, the chronometer in this collection possesses features that Harrison’s creation lacked, namely two green, silk-covered wires. These wires, which are housed in the case’s uppermost compartment, form a circuit with the chronometer’s battery and a brass knob mounted on the rosewood case.

This object came to the Gettysburg Cabinet by way of Gettysburg College’s Physics Department, where it was used as a teaching implement. It was retired from its didactic purpose and now serves as a display object in Masters Hall.