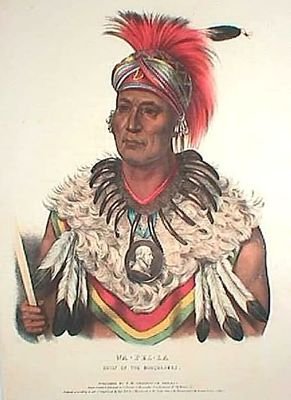 Discovery of the New World: ‍First Impressions of Natives and their Lasting Effects

As European voyages increased in the Age of Discovery, so did the “rage to know” concerning strange people and strange customs; an appetite usually satisfied by collecting curiosities.[1] Objects from Africa and the Americas further fueled the Renaissance passion to collect exotic and rare objects. “Natives” themselves were seen as subjects to be put on display. The Native American portraits, painted by Charles Bird King (American artist, 1785-1862), displayed in the Gettysburg Cabinet connect the spirit of inquiry of the Renaissance with the still present urge to preserve history.

Since antiquity, writers like Pliny the Elder established a notion of other races being monstrous or a “simulacra of humankind,” fueling centuries of Euro-centric racism. Coinciding with the idea of cabinets of curiosity, Europeans willingly (even eagerly) conceded the existence of monsters. [2] When Europeans voyaged to the Americas, they equated traveling great distances from Europe with moving back in time. By definition, indigenous peoples existed outside of history because they had not yet transcended their barbarism. These primitives, Christians argued, shared neither a common past nor a common present with themselves. Therefore, they had no common future with Europeans. The fate of native peoples was sealed when they were declared inferior and barbaric. [3] They viewed inhabitants of the New World as a scientific interest and, consequently, explorers, merchants and, ultimately, settlers helped bring artifacts and ideas about Native American culture to European collections and cabinets. Cosimo de’Medici, for example, came to own a number of garments and other items in featherwork. Such material quickly found its way beyond the princely setting into collections such as those of Ulisse Aldrovandi, Ferdinando Cospi, and Ole Worm.

Letters, chronicles, works of fiction, and visual arts in the sixteenth century reveal that the discovery of the New World engaged the popular imagination, as images of the encounter was able to spread faster with the development of the printing press. Some of what was printed was more fantasy than fact. Artists did not accompany the earliest voyages, and many visual images of the New World during the first half of the sixteenth century reinforced existing myths or created new ones.[4] Written descriptions were also distorted, and often the Europeans saw what they wanted or expected to see.

Christopher Columbus’ diaries and “Letter to the Sovereigns,” in which he describes the New World to his patrons in Spain, and Amerigo Vespucci’s, the man who the continent is named, accounts are all some of the most important documents concerning the discovery of America. A twofold of the peoples of the Americas both as noble savages and barbarians was imprinted in European consciousness from the moment of the first encounter. The picture became fuller and richer as European observers contributed new information to it, drew moral conclusions from it or embellished it with comparisons to classical antiquity and medieval romance.[5] These early illustrations show that the Europeans had a fascination with traits that were considered primitive or outside the bounds of civilization. Cannibalism, mentioned in both the Columbus and Vespucci accounts, was first illustrated in a German woodcut from 1505.

A turning point toward more accurate images of the New World occurred when artists began to accompany expeditions and render scenes from life. The variations reflect differences in artistic skill and attitude toward the subject, rather than fantasies or inventions based on written descriptions that were themselves often the result of preconceptions and fantasies. The tendency of trained artists to borrow from the work of other established artists was as common in the sixteenth century as it is today. [6]

Fascination with Native Americans and the New World continued into the 18th and 19th century. An admirer and supporter of the Native Americans, Thomas McKenney (a United States official who served as Superintendent of Indian Trade from 1816–1822), spent his tenure in office fighting to preserve their legacy through a gallery of paintings by various artists. McKenney enlarged his Indian archive with collection of books, maps, and other written material about the leaders and various tribes. He realized that the Indian way of life was changing and wanted to keep a pictorial record of their lives. He enlisted Charles Bird King to paint their portraits, two of which are included in the Gettysburg Cabinet.

When the process of lithography offered a medium to reproduce the images, McKenney began shipping the original paintings, a few at a time to Philadelphia. They were copied on canvas by Henry Inman, an artist and partner in the lithographic establishment of Inman and Childs.[7] There portraits were published in History of the Indian Tribes of North America which contained biographies written by James Hall as well as the general historical sketches of the Indian tribes. The original collection of King portraits was transferred to the National Institute in 1841 and then in 1858 to the Smithsonian Institution. The Smithsonian fire of January 15, 1865, destroyed many of the portraits, but luckily, the Henry Inman copies of the King portraits survived and are able to be displayed here today. [8] The two hand colored lithographs of Wa-Pel-La and Push-Ma-Ta-Ha were a gift from Geoffrey Jackson, Class of 1991, to Gettysburg College, in October 2011. They were part of a gift to Special Collections of seven lithographs. I chose to display these two portraits in this cabinet because of the distinct contrast between the two Natives.

Wa-Pel-La is seen in traditional Native American dress and wearing the Peace Medal, an important symbol of the intended good will of the U.S. Government towards the Native American population. Wa-Pel-La’s, Chief of the Musquakees, name signifies the Prince or Chief. He was the head man of the Musquakee or Fox tribe and a delegate who went to Washington in 1837 with Keokuk for a council held by the Secretary of War to reconcile the Sioux with the Sauks & Goxes. [9] It was said that in a speech that he made on his visit to Washington D.C. he stated that he was so happy that the "white man" has invited him and so happy his people can be a part of their world.

Push-Ma-Ta-Ha is dressed in his army uniform showing the assimilation that the Natives ultimately went through to become “proper citizens.” Few Choctaws from the early 1800’s are better known than Push-Ma-Ta-Ha. He negotiated several well-publicized treaties with the United States and led Choctaws in support of the Americans during the War of 1812. He is now buried in the Congressional Cemetery in Washington, D.C. [10]

These two portraits create a balance between art and history. They represent a time when Natives were being assimilated from the West into more "civilized" persons. However, the artists intent was the opposite of those during the Renaissance. McKenney commissioned Charles Bird King to preserve the race to prove that there were once humans that existed like them. Whereas, in the Renaissance, Native Americans were put on display and documented because of the wonder and the myths that were associated with the New World. The purpose was to expose them for their differences rather than their similarities.

[1] Dickason, Olive Patricia. The Myth of the Savage: And the Beginnings of French Colonialism in the Americas. Edmonton, Alta., Canada: