Fish: A Sea of Knowledge 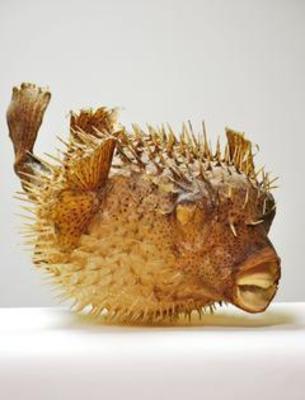 A Sea of Knowledge

As the wonderment of cabinets of curiosities captivated Europeans during the Renaissance, many species of fish were heavily sought after for these collections. Fish were a frequent subject of scientific inquiry during the 16th and 17th centuries, due to their heavy symbolism and representation at the time. Fish were not only collected and displayed, as seen in The Gettysburg Cabinet, but they were also represented in Renaissance paintings, as decoration in apothecary shops, and in books. Europeans viewed fish, indeed all areas of nature, as reflections and expressions of the intentions of God. As religion was such a significant part of peoples’ lives, so too were fish an important symbol of God’s work, seen in the teachings of Jonah and the whale as well as Saint Peter paying taxes on a fish that had swallowed a silver coin. Grotesque fish and aquatic singularities were common themes of morals in the 16th and 17th century, like sharks as a sign from God to amend monstrous sins. Sometimes fish were even used by political powers to symbolize their strong coastal territories.[1] [2]

Fish references were not limited to Renaissance Europe. Fish were also studied and documented in the antiquity of Rome, Greece, Japan, and in the Far East. There was an ancient idea that all creatures on Earth had an aquatic counterpart, which was still explored at the time of cabinet collecting.[3] An example of this counterpart relationship can be seen in The Gettysburg Cabinet. Great naturalists like Ulisse Aldrovandi and Conrad Gesner referred to the pufferfish as a grotesque representation of a human head. Bartolomeo Passarotti made this comparison in his painting Fish Vendors with the juxtaposition of a pufferfish and a peasant’s head. [4] This objectification of the lower class was a source of comedy for the wealthy during the Renaissance. The paintings of markets by artists like Passarotti were portrayed to the same extent and detail as actual markets in Europe.[5] In a way such paintings were evocative of cabinets of curiosities because fish were often at the foreground, displayed on the plane to allow for maximum view. Fish played a large role in commerce during the 16th and 17th centuries. Merchants at the fish market were collectors in their own right because they tracked and identified the fish they caught and sold.

Another area of commerce reflective of collecting during the Renaissance was the apothecary shop. Apothecaries used shop design to showcase their knowledge and attract potential customers. This was accomplished by using rare fish as drug jars and by suspending singularities from the ceiling, such as pufferfish.[6] An additional inspiration for collectors were the nature catalogues published by naturalists or collectors like Gesner and Ferrante Imperato.[7] [8] These detailed accounts of nature allowed for the spreading of knowledge contained in cabinets throughout Europe. [9] This was particularly helpful with the transmission of fish knowledge, due to the difficulty of their preservation and transport.[10] The use of natural history books continued after the Renaissance and became vital in the groundwork of modern ichthyology. Mark Catesby, an English naturalist of the 18th century, published books on plants and animals. His work The Natural History of Carolina, Florida, and the Bahama Islands focuses largely on naturalia of the new world. In this natural history book, many species of fish are naturalistically depicted while Catesby comments on behavioral patterns and even their role in commerce. Specifically, Catesby comments when particular species of fish are plentiful in the fish markets. Catesby even depicts a pufferfish in some of his work. Another natural historian that portrayed fish in his work was Albertus Seba. A Dutch zoologist, collector, and pharmacist, Seba published a Thesaurus in the 1750s, and later his collection was published in Albertus Seba's Cabinet of Natural Curiosities.

The 16th and 17th centuries are filled with numerous examples of the perceptions, portrayals, uses, and collections of fish throughout Europe. Fish were collected for their uses or exoticism and these accounts of fish were only a small part of the wondrous world of cabinets of curiosities. The Gettysburg Cabinet contains two, dried pufferfish, both a brown color, with spots, protruding spines, and gaping mouths. The smaller specimen possesses a shorter tail, as well as less protuberant mouth and eyes. Both specimens belong to the family Tetradontidae; the species are likely different based on observation of size difference and tail shape.[11] Although it is fairly certain these are different species, it wasn’t unheard of to mistake fish from the same species as different due to sometimes careless preservation techniques during the Renaissance. Carolus Clusius, a prominent botanist,depicted four pufferfish specimens as four species, when they were later found out to all be from the same species. [12] The Gettysburg Cabinet’s fish skeleton is derived from a garfish of the Lepisosteidae family. These fish have both an endo- and exoskeleton and both are preserved nicely in the cabinet.[13]

Jack Ryan, the Vice Provost of Gettysburg College, acquired then loaned the pufferfish specimens, while the Vertebrate Zoology division of the Biology Department owns the garfish skeleton. These specimens are from the 20th century, but they act as evidence that curiosity about marvelous aquatic creatures was widely prevalent during the Renaissance, and this inquisitiveness continues today. Indeed, the curiosity and interest in many naturalia and artificialia are still an area of study today, and many objects and specimens embellish the walls, cabinets, and shelves of The Gettysburg Cabinet.

For a more complete and in depth discussion of fish collecting during the renaissance, please refer to this paper.