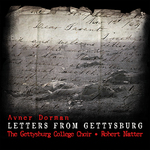 Avner Dorman has fast become one of the most sought-after composers of his generation. In 2018, he received the prestigious Azrieli Prize for composition for his second violin concerto. His debut opera, Wahnfried, commissioned by Staatstheater Karlsruheas a counterpoint to their new Ring cycle in 2017, received unanimous and enthusiastic reviews, and was a nominee in the 2018 International Opera Awards, in the category of World Premiere.

Letters from Gettysburg, a work scored for soprano, baritone, large chorus,and percussion, is the centerpiece in this all-Dorman release. Written in 2013 to commemorate the 150th anniversary of the Battle of Gettysburg, it was commissioned by the Gettysburg College American Civil War Sesquicentennial Planning Committee. Following its premiere, Letters from Gettysburg was broadcast on radio stations across the U.S., including KUSC, WWFM, and WETA.

The text for Letters from Gettysburg, Dorman writes, “comes mostly from letters written by 1st Lieutenant Rush P. Cady – Co. K, 97th New York Infantry, who was fatally wounded during the Battle of Gettysburg and died a few days later. ”In five movements, organized in symmetrical arc form, Letters from Gettysburg displays Dorman’s soulful expression as a composer, combined with inventive vocal writing. These powerful texts are poignantly supported by percussion scoring that creates an almost supernatural ambience, recalling the tragic events of the War.

Coupled on this recording are two Dorman works commissioned by Orli and Gil Shaham. Dorman composed After Brahms, three short pieces for solo piano, for Orli Shaham’s solo project, “Brahms Inspired.” In each of the movements, Dorman cleverly extends the harmonic language of Brahms while still preserving the stylistic vernacular of his own music. The violin sonata, Nigunim, was commissioned by Orli and her brother Gil for a “Hebrew Melodies” project, released on Canary Classics in 2012. Nigunim draws on the musical influences of Jewish song, hailing from locations around the world – Africa, the Caucasus, the Balkans, and Central Asia. With these global influences, the listener can imagine, hypothetically, the music of the Ten Lost Tribes. After Nigunim’s premiere, San Diego Today affirmed that “it was hard to miss [its] visceral excitement and structural elegance,” and the Boston Globe admired the “uncommonly intriguing sounds.”

Hailed as a “brilliant young Israeli composer” by Stephen Brookes in The Washington Post, Dorman is currently an associate professor of composition at the Sunderman Conservatory of Music at Gettysburg College. He is also an active conductor, having served as music director of CityMusic Cleveland Chamber Orchestra for six years.

This is the publisher's version of the work. This publication appears in Gettysburg College's institutional repository by permission of the copyright owner for personal use, not for redistribution.