The Voters Have Spoken: What Did They Say?

Kenneth Mott is Professor and former Chair of the Political Science Department at Gettysburg College. His principal academic interests are public policy, electoral politics, constitutional law, and civil rights and liberties. He has served as a co-director of three Peace Corps projects for Tunisia, campaign manager for four successful local political races, advisor to both campus Republican and Democratic student organizations, college pre-law advisor, and author of two books, The Supreme Court and the Living Constitution (University Press of America), and Religion, the State, and Education: The Supreme Court and perspectives of Theory (University Press of America)and numerous articles. 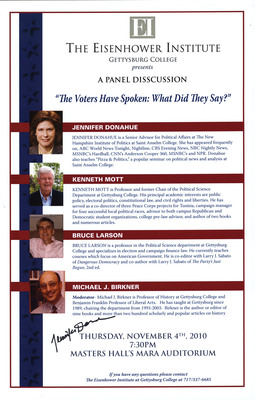