Republicans and Race: The GOP's Frayed Relationship with African Americans, 1945-1974

The Eisenhower Institute presents Tim Thurber, Associate Professor of History at Virginia Commonwealth University, and his book Republicans and Race: The GOP's Frayed Relationship with African Americans, 1945-1974. From the University Press of Kansas: In this path-breaking book, historian Timothy Thurber illuminates the deep roots of this gulf by exploring the contentious, and sometimes surprising, relationship between African Americans and the Republican Party from the end of World War II through Richard Nixon's presidency. The GOP, he shows, shaped the modern civil rights movement, but the struggle for racial equality also transformed the GOP.

Tim Thurber is an Associate Professor of History at Virginia Commonwealth University and the author of Republicans and Race: The GOP's Frayed Relationship with African Americans, 1945-1974. 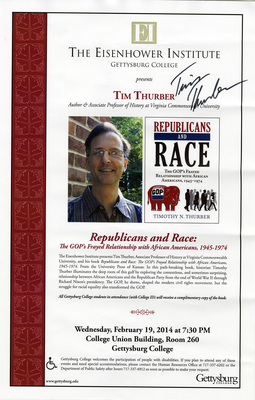