Since May 2010, Ambassador Francisco Campbell has served as Nicaraguan Ambassador to the United States. An activist in the Sandinista National Liberation Front (FSLN), Campbell went into government service following the Nicaraguan Revolution in 1979. From 1982 to 1986, he serves as Deputy Chief at Nicaragua's Embassy in Washington DC, overseeing outreach activities and congressional relations, and served concurrently at Nicaragua's Permanent Mission at the United Nations. The first ambassador of Nicaragua to the U.S. to come from the Autonomous Regions on Nicaragua's Caribbean coast, Campbell has been a driving force in building institutions in Nicaragua's Autonomous Regions. 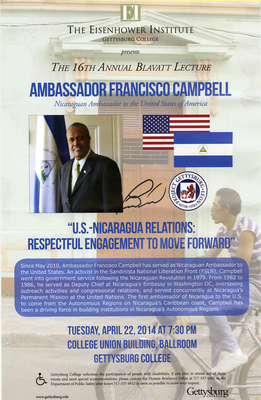