American General: The Life and Times of William Tecumseh Sherman

Please join the Eisenhower Institute for a book event in honor of the late General John S.D. Eisenhower, as we celebrate his recent book, American General: The Life and Times of William Tecumseh Sherman. In American General, Eisenhower paints a "surprising portrait of William Tecumseh Sherman, the Civil War general whose path of destruction cut the Confederacy in two, broke the will of the Southern population, and earned him a place in history as 'the first modern general.' Yet behind his reputation as a fierce warrior was a sympathetic man of complex character." In this remarkable reassessment of Sherman's life and career, Eisenhower takes readers "from Bull Run through Sherman's epic March to the Sea, offering up a fascinating narrative of a military genius whose influence helped preserve the Union - and forever changed war." 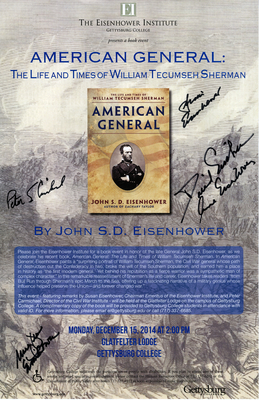