For thirty years, the United States and Iran have been stuck in an unbreakable downward spiral of futility. What exchanges exist have been mostly threats, insults, and empty slogans. We are the "great satan" and they are the "axis of evil." Attempts to break the cycle have foundered on the rocks of mistrust, suspicion, and toxic domestic politics in both Tehran and Washington. Breaking the cycle - which is the interest of both sides - will require patience, forbearance, and simultaneously having both high and low expectations.

Ambassador John Limbert served as Ambassador to the Islamic Republic of Mauritania from 2000-2003, Deputy Coordinator for Counterterrorism in the State Department, and was the first-ever U.S. Deputy Assistant Secretary of State for Iran from 2009-2010. Limbert is an advisory board member at the National Iranian American Council, an organization that advocated for greater engagement between the U.S. and Iran, and is the Distinguished Professor of International Affairs at the U.S. Naval Academy. 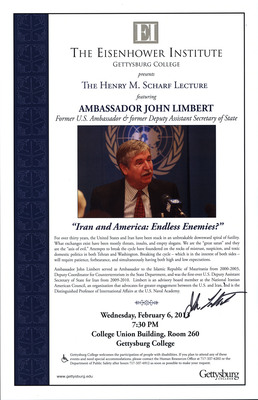