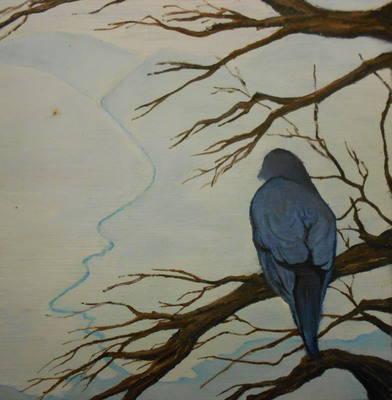 One of a series of oil paintings made for the 2014 Senior Studio Art Capstone.

"Hugin (Thought)" is part of my Personal Mythology painting series, which references folklore and mythology from various different cultures with an aim to emphasize the ambiguous and universal nature of those stories. Much as each culture viewed the same world and made their own traditional stories to explain what they saw, each individual has a personal understanding of the tropes and tales that make up the folklore they know.

Like the other paintings in the series, "Hugin (Thought)" is meant to allow viewers to draw their own conclusions about the events portrayed, according to their own understanding. However, it specifically alludes to Norse mythological tradition; Hugin and Munin, symbolizing thought and memory, respectively, are Odin's companion ravens who fly over the world to bring him information.