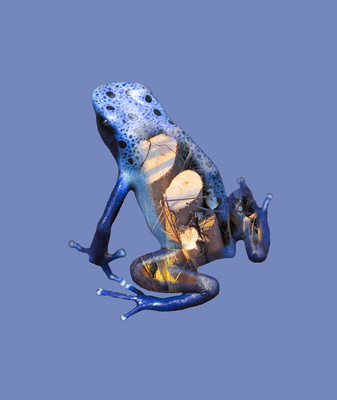 Human greed and ignorance bulldoze through nature, leaving behind scarred landscapes and broken ecosystems. Within the world’s aquatic environments, human actions have irreversibly fragmented and shattered habitats of countless animals. Voiceless, these displaced animals suffer largely in silence—their stories untold and invisible. Using my lens to expose their cries, my photography uncovers the narrative of habitat destruction.

In this photo essay, I juxtapose the pristine and degraded habitats of five threatened aquatic species using double exposure techniques, a method where two disconnected images are merged to create one unified work. By balancing light, opacity, color, and transparency, I focus attention upon the habitat loss and degradation threatening these species.

While the deterioration of natural habitats is well known in the scientific and political community, it remains a topic that is hard to visualize. Placed side by side, my photographic series transitions the observer from society’s perception of nature to the actual transformed environments which expose the struggles of these afflicted animals.

To display the issue from the internalized vantage point of the affected aquatic animals, I overlay the landscape within the body of the animals, rather than place them within the habitat itself. Isolated within the animals, the unbreakable tether between species and habitat is revealed. Norwegian artist Andreas Lie and Scandinavian graphic designers Hanne and Tobias Scheel Mikkelsen employ a similar method in their double exposure work with terrestrial animals. While these artists join animals within their habitat in a single image, my dual-framed animal photographs create a transitional display which invites contemplation of the ever-changing habitat caused by human development.

It is my hope that my images make the call for change as inescapable as the plight menacing many aquatic species.

This work is licensed under a Creative Commons Attribution-Noncommercial-No Derivative Works 4.0 License.