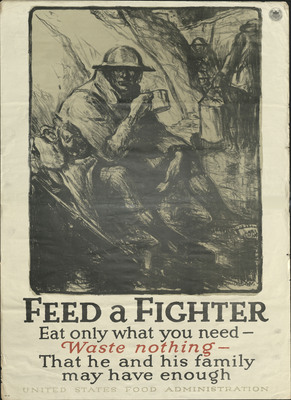 A man hunkers in a trench surrounded by shadows, obscuring his surroundings. The impression is dismal while below a caption exhorts the viewer to conserve food to feed the soldier, who is without food.

“Feed a Fighter” was created by Wallace Morgan in 1918 in the midst of both World War I and a global food shortage. Grain was at the heart of this crisis because grain is transported the easiest and the basis for most foods, so when grain production fails, food production fails. Grain prices rose dramatically as Europeans and Americans competed for a limited supply of grain Poor crops in 1916 and 1917 exacerbated the issue. The US produced a billion bushels of wheat in 1915. A year later, we barely produced half of that, only producing 636 million bushels. Posters, such as this, were created to encourage the preservation of food to supply soldiers with the food that they needed to fight. Liberty gardens were created to relieve the strain on farmers and farming was studied to increase production and eliminate waste. People were encouraged to use corn and rye as substitutes for wheat. These posters encouraged people to adhere to ration days, such as wheat less Mondays and Wednesdays or meatless Tuesdays, so that their soldiers could eat. These posters encouraged people to adhere to an otherwise dreary meal plan.

The poster measures 74 cm x 54 cm (approx. 29 in x 21 in) and was commissioned by the United States Food Administration.