Keep this Hand of Mercy at its Work 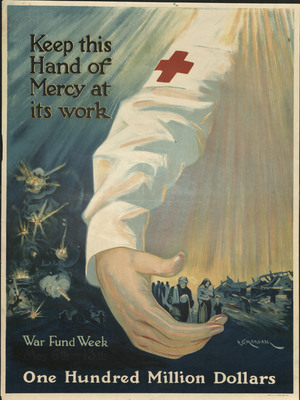 Upon American entrance into World War One in April of 1917 the American government began a major fundraising campaign. In the propaganda poster “Keep this hand of Mercy at Work” the Red Cross sought to raise $100 million in one week. The poster encourages Americans to support the war effort. Elements of fighting and humanitarian outreach are both evident in the artistry. The left foreground of the painting shows a battle scene with cannons and bodies exploding into the night sky. The “Hand of Mercy” is coming down from the sky to shield the wounded and innocent, and is available to assist them the next day as sunlight shows through the clouds. This merciful hand descending from the heavens plays on the American emotion of Godly intervention. By contributing to the Red Cross American citizens could help perform God like acts to help people in need, like the wounded man and the widowed mother and children in the right foreground. The clear separation of night and day signifies that this “Hand of Mercy” could turn dark into light, night into day, and donations could help to end the war. Through the help of the American Red Cross innocent people could be sheltered from the fighting and even saved through the aid they were receiving. Adjacent to the woman and children is a house that has been turned to rubble from the previous night’s fighting. However, with the help of the Red Cross, people have a reason to hope that brighter days are ahead. The core of this poster is the transition of darkness to brightness and that Americans, specifically the Red Cross, could be the Divine intervention to bring about the end of the war. The poster suggests that it was their duty as Americans to help those who could not help themselves. American involvement in the war was equivalent to Godly intervention.

Beldoch, Kyle A., "Keep this Hand of Mercy at its Work" (2014). World War I Poster Project. 4.
https://cupola.gettysburg.edu/wwiposters/4

Keep this Hand of Mercy at its Work.docx (281 kB)
Poster Description