Raised 'em myself in my U.S. School Garden 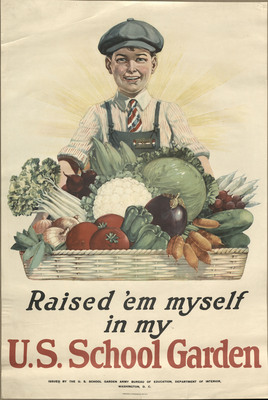 This poster, issued in 1919, illustrates the initiative by the United States School Garden Army (USSGA) to encourage children to participate in gardening at school to aid in the war effort. The poster’s artist is anonymous, and it was printed by the American Lithographic Co. for the Department of Interior, along with many similar posters in the USSGA series. The school garden movement began in the 1890s to teach children about the environment and the importance of giving back to the local community. The Department of Agriculture and the Bureau of Education supported the movement, which had been gaining momentum ever since its introduction to American schools in the late nineteenth century. In 1917 the USSGA was created in hope of avoiding a food shortage. President Woodrow Wilson allocated $200,000 from the National Security and Defense Fund for gardening supplies. The school garden movement garnered widespread national support, with groups like the National Boy Scouts of America launching similar garden campaign efforts and figures such as Herbert Hoover (then the head of the U.S. Food Administration) writing letters of encouragement.

The smiling boy in the poster is patriotic, accomplished, and happy. He proudly presents his bountiful yield of large, colorful vegetables grown in his school garden, ready to send them off wherever they may be needed, whether overseas or on the home front. Beams of sunlight shoot out from behind him, emphasizing his righteousness and pure intentions. The language of the caption aims to send children the message that they can (and should) do their part at home to make a difference overseas. It is notable that many such USSGA posters depicted girls, so this particular poster was likely meant to appeal to boys of the day. This poster was probably hung in schools, libraries, or other municipal buildings where children and parents would have seen it. It was issued after the last year of World War I, when the USSGA was already operating for two years. The boy’s cheerful demeanor in the poster not only reflects the sentiments of America’s children who had been proudly gardening for two years, but perhaps also contains underlying threads of reinforcement for the movement after the war drew to a close.